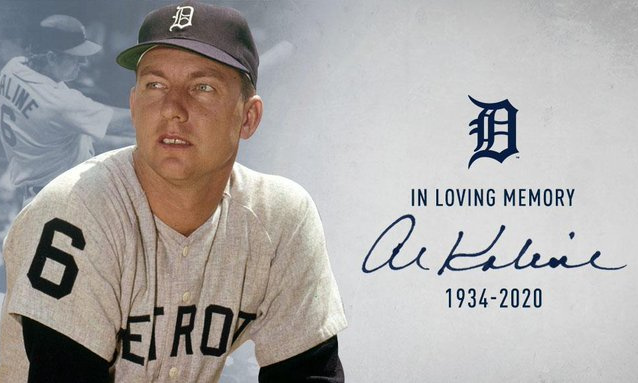 Al Kaline, the legendary Detroit Tigers’ right fielder, passed away on April 6 at his home in Bloomfield Hills, Mich. He was 85. Nicknamed ‘Mr. Tiger’, he played 22 seasons for Detroit. He was selected to 18 All-Star Games, and was inducted into the Baseball Hall of Fame in 1980.

Immediately after retiring as a player, he joined the Tigers’ television crew,, a position he held until 2002. Kaline worked for the Tigers as a front office official until his passing. His 67 years with one team was one of the longest tenures in MLB history.

Sentiment Aside, Kaline Made for World Series

When Mayo Smith and the Detroit Tigers announced Al Kaline was going to start the World Series, there wasn’t a dry eye in the state of Michigan.

It proved baseball had a heart. It was saluted as the sentimental gesture of the ages. Even though it meant taking the best center fielder in the league and making a shortstop out of him, the fans shrugged. No sacrifice was too great to make for “Mr. Heartbreak.”

Al Kaline was probably the greatest player in baseball never to have played in a World Series. You had to go clear back to Walter Johnson to find a similarly forlorn figure in the grand old game. And, Walter was in his dotage before he finally got to tee it up in a World Series game. One of the sentimental sagas of sport was the day he won his first game. No one could see the field for the teardrops.

You would have thought Mayo Smith had suited up the statue of St. Francis of Assisi. Of

course, four out of four fans figured Al would suit up, take one or two turns at bat, and then retire to the rocking chair to spend the rest of the Series clapping people on the back.

It was such a sad story that, if they made it into a movie, Doris Day would spend nine reels crying — as sad as a train whistle on a summer night, “Home On the Range” on a campfire harmonica.

Albert William Kaline had everything a great ballplayer should have — perfect balance at the plate, perfect stride into the pitch, level swing. He never spent a day in the minor leagues. He was the youngest ever to win the batting title. In the outfield, he could go in for Tris Speaker for defensive purposes. He has hit more than 300 lifetime home runs.

Yet he spent his career from 43 to 25 games away from the pennant every year. He was like Bernhardt performing in Altoona, card tricks in the dark. Very pretty, too bad nobody was looking. The act was good enough for the Palace but it stayed out in the tents.

So, when after 16 years of impeccable play, complicated by a succession of injuries, combating a chronically malformed foot, A.W. Kaline finally got in a World Series, the fans could be pardoned for regarding it as a token appearance. I mean, how could he crack an outfield of Stanley, Horton and Northrup? What was he, 49 going on 50? 51? Could he get around on a fast ball anymore? Was the arm gone?

After 2,090 games, Kaline finally got the show on Broadway. They took the sheet off the statue. The monument was out taking its cuts.

The scene was set for an historical pratfall, for the guy to wait in the wings for 16 years and then come on and forget his lines.

But Kaline was still under the hill. The perfect swing, the perfect stride got the only extra-base hit off Bob Gibson in Game 1. He represented the high-water mark of the Detroit effort in Game 3 when his two-run homer put the Tigers in front in the Series for the first time. Even the St. Louis track team took no chances with his arm.

But it might all have come up “Loved him, hated it” for Al in Monday’s game. He was hitting .350, had one hit already in the day, but the Series was on the line with the bases loaded and one out in the seventh. The perfect stride, the perfect balance, and the ball was shot out into center field for a two-run single and Detroit had dodged a bullet and taken the lead.

Santa Claus had gotten down the chimney. The guy in the white hat got away from the rustlers. Al Kaline finally got in the World Series and showed he belonged there all the time.