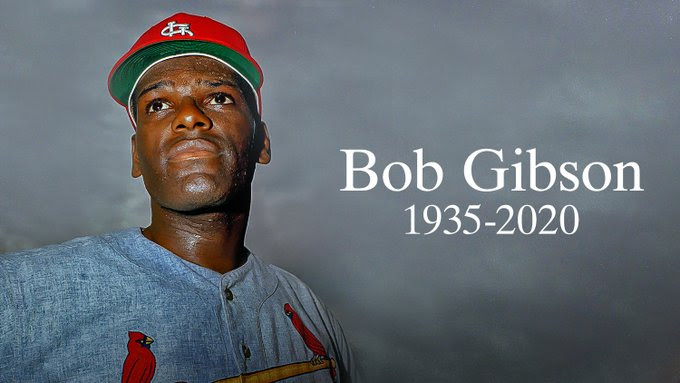 Bob Gibson, a former St. Louis Cardinals pitcher and a member of the Baseball Hall of Fame, died of pancreatic cancer on Friday in his hometown of Omaha, Neb. He was 84.

Gibson’s death came on the 52nd anniversary of perhaps his most overpowering performance, when he struck out a World Series record 17 batters in Game 1 of the 1968 World Series against Detroit.

He was inducted into the Baseball Hall of Fame in Cooperstown in 1981.

Gibson Ability Is ‘Gift’; So Is Color of His Skin

Bob Gibson doesn’t dislike white people, he just wonders where they were when he needed them.

He is no more fun to face with a pencil than with a bat. He doesn’t consider reporters evil, just stupid. Not all of them, he points out in his remarkable book, “From Ghetto to Glory,” just most of them.

His answers come back like his high, hard one. You don’t dare take a toe-hold on them. Bob resents any quotes that make him sound like Chapter 2 of Uncle Remus or a jive-talker from Lennox Ave.

“I’m a Nebraskan,” he notes simply.

Some Nebraskans didn’t care for the sensation, he also points out in his book, co-authored by Phil Pepe. The painter who walked off the job in the middle of spraying his house, for instance, but the unconscious irony of the colloquy of two other neighbors was not lost on Gibson. “There’s a Negro just moved in across the street,” one was told. “No,” was the contradiction, “that’s Bob Gibson.”

There are those who think it remarkable Bob Gibson can throw that hard, handicapped as he is by the chip on his pitching shoulder. Others decide it is an advantage. “Some guys load the ball with spit,” notes another player. “Others load it with hate.”

The trust of the matter is, Bob Gibson puts no pressure on Bob Gibson. He neither hates nor likes. He accepts the challenge, the records, the notoriety, with a shrug. He takes his ability to throw a baseball for granted. “I am not proud of that ability,” he says simply. “It was a gift.” It was from the same donor, he notes, who gave him the color of his skin.

Gibson’s advantage lies not in his right arm but in his two feet. He RUNS the first few feet of the 60-1/2 from the mound to the plate as he pitches. By the time Bob Gibson lets go of the ball with his long arm and longer legs, it has only about 53 feet left to cover. Gib is so close to the batter when he releases the ball he can smell what he had for breakfast. He looks like he’s running in for a bunt on every pitch. It’s fortunate he’s abundantly reflexed, otherwise he’d have holes in him. Robert Clemente broke his leg with a line drive back to the mound last year. Where Gibson ends up after a pitch, he has to guard not only against the ball, but also the bat.

If this World Series has done nothing else, it has laid to rest the ghost of John McGraw and other nasty-tempered martinets of the dugout, the “Stick-it-in-his-ear!” or “You-get-this-busher-out-or-get-on-the-bus-to-Spokane-next-year!” type of leader. The kind the press describes as “fiery.”

The only thing fiery about Cardinals manager Red Schoendienst is his hair. Detroit’s Mayo Smith treats his ball club as if he were trying to sell them a new car, a sort of “Gee, fellows, be serious!” type of relationship.

You won’t see either Red or Mayo running out to scream at the umps every other play, or jumping up and down on their caps. Mayo acts like the head abbot in a friary. Schoendienst wouldn’t raise his voice if he saw a tarantula crawling up your leg. If you came in late, you couldn’t tell by his expression whether he just won the pennant — or just lost it.

Neither manager would stoop to pasting clippings on the locker room door, or trying to convince his charges the other guys spent all their time poisoning Pablum or gassing canaries. They take the position baseball is no more emotional than accounting, that it’s just another white-collar job, a game, not a war. They leave fines to traffic judges, curfews to the shore patrol. They watch a game like titled Englishmen at a cricket match.

They have no flair for self promotion. You can understand every word they say; they don’t criticize their players in print. They make Dr. Schweitzer look cantankerous, and Hubert Humphrey, pessimistic. They will be on camera so little, they can go on “What’s My Line” unguessed before an unmasked panel.

Their teams are like they are, as efficient as morticians, as evenly matched as Lunt and Fontanne. If the old Cardinals were the “Gas House Gang,” this one is the “Guest House Gang.” With these two in command, the World Series is going to be so impersonal, they might be able to play it by mail. It’ll be as polite as a French duel, as restrained as a UN debate. Not even the insolence of a Lou Brock stealing second on a pickoff attempt can provoke retaliation. They should donate the proceeds to Moral Re-Armament or the American Friends Society. Now that it’s all tied up, they may show up for the third game with flowers in their hair or “Make love — not outs” signs on their uniforms, a 50-man object lesson in non-violence.