It didn’t take long for life in the pandemic to take a nasty turn for the Manitoba Junior Hockey League.

The 12-team league was cruising along, having gotten in 38 regular-season

games since opening on Oct. 9, until the province’s numbers started running wild. By Tuesday, the Winnipeg Free Press was suggesting the MJHL’s season might be in doubt.

On Monday, Hockey Manitoba announced that it had shut down all hockey activity in the Winnipeg metropolitan region effective immediately, with things to be revisited on Nov. 15. As a result, the MJHL postponed weekend games that were to involve the Selkirk Steelers, Winnipeg Blues and Winnipeg Freeze. At the time, the league said the weekend’s other games would go ahead as scheduled, after which it would shut down until Nov. 20.

On Tuesday, the MJHL announced that “this week’s games involving the OCN Blizzard have been postponed due to a public health concern.” 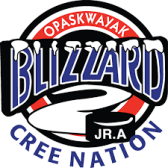 reporting that “at least one player with the OCN Blizzard has tested positive for COVID-19, putting the club’s season and perhaps even the MJHL’s 2020-21 campaign into doubt.”

The Blizzard was to have played the Kings in Dauphin on Tuesday night, but that game was postponed. The teams played Sunday in Dauphin, with the Blizzard winning, 7-4. The Blizzard player who tested positive played in that game.

The parent of an OCN player told the Free Press: “All the details haven’t been released yet. I certainly wouldn’t want to provide any misinformation, so the information has to come from the right channels. (The organization said) just that there’s been possible exposure in the division, so we’re following proper health protocols and going into isolation mode until there’s more information.”

The Free Press also reported it had been told by multiple sources that “OCN players from outside The Pas were being told to return home.”

A parent of a player with a different MJHL team told the Free Press: “Almost close to calling that anonymous line for COVID reporting. Something I think MJHL commissioner should answer questions on. Certainly OCN. But sure the league is done until (Christmas) at least after this.”

According to the MJHL’s schedule, weekend games in Winkler, Portage la Prairie, Steinbach and Dauphin will be played before the league breaks until Nov. 20.

The story from the Free Press is right here.

Our latest blog looks at the career of Brent Gogol – one of the toughest players ever to skate in the Western Hockey League.

Brent Gogol holds the WHL record for most penalty minutes in one season — 511 in 1977-78. He started the season with the Victoria Cougars, earning 46 minutes in six games. He was dealt to the Billings Bighorns, where he added another 465 minutes in 61 games. . . . Interestingly, Mel Hewitt, who split his 1977-78 season between the Saskatoon Blades and Calgary Wranglers, finished only three minutes behind Gogol in that same season. . . . In 1990-91, Kerry Toporowski of the Spokane Chiefs got to 505 minutes. You have to wonder if he knew how close he was to Gogol’s record at the time.

Gump Worsley, knocked out cold by a slapshot. Don’t worry, it’s nothing a few cold beers won't cure for the Gumper. pic.twitter.com/sTdzUGNCMl

I got the Rona hopefully I’ll be back healthy soon

CB Marlon Humphrey of the Baltimore Ravens has tested positive. He played every defensive snap on Sunday in the Raven’s 28-24 loss to the visiting Pittsburgh Steelers. . . . The Steelers announced Monday that all of their tests had come back negative. . . . By Tuesday, though, the Ravens had put seven players on the reserve/COVID-19 list — linebackers Tyus Bowser, L.J. Fort, Malik Harrison, Matthew Judon and Patrick Queen, DB DeShon Elliott and practice squad DB Terrell Bonds. Those seven will quarantine for five days but could be activated in time to face the host Indianapolis Colts on Sunday. . . .

RB AJ Dillon of the Green Bay Packers has tested positive and won’t play Thursday against the host San Francisco 49ers. Dillon played on Sunday as the Packers dropped a 28-22 decision to the visiting Minnesota Vikings. He was on the field for 10 offensive snaps and seven plays on special teams. . . . RB Jamaal Williams and LB Kamal Martin, named as high-risk close contacts, also won’t play. . . .

The NFL’s Arizona Cardinals came off their bye week and head coach Cliff Kingsbury revealed a pair of positive tests from the weekend. Kingsbury wouldn’t provide identities of the two players, but LB Devon Kennard later reported on Twitter that he had tested positive. . . . The team also has placed CB Byron Murphy on the reserve/COVID-19 list. . . . The Cardinals are to play the visiting Miami Dolphins on Sunday. . . .

QB Andy Dalton of the Dallas Cowboys had been expected to return on Sunday against the host Pittsburgh Steelers. However, he was placed on the reserve/COVID-19 list on Tuesday. . . . Dalton missed the Cowboys’ previous game with a concussion. . . .

The U of Wisconsin Badgers have had a second straight football game cancelled. The Badgers were to have played Purdue on Saturday. Wisconsin has had 27 positives since Oct. 24 — 15 players and 12 staff. . . . Interestingly, there isn’t room in the Big Ten schedule to play games that are affected by the virus, so the games are cancelled. . . .

Following one positive test, the junior B Kimberley Dynamiters of the Kootenay

International Junior Hockey League have nine additional members of the organization self-isolating until Nov. 11. This comes after the Interior Health Authority completed contact tracing. The Dynamiters’ last exhibition game, scheduled for Friday against the visiting Fernie Ghostriders has been cancelled. . . . The KIJHL plans on opening its regular season on Nov. 13. The Dynamiters are scheduled to be at home to Fernie that night. . . .

The Chilliwack Minor Hockey Association has paused for at least two weeks. An outbreak at a Chilliwack dance studio — there are at least 30 positives — resulted in meetings between the CMHA and health authorities, and a decision was made to suspend all hockey activities. . . .

The South Eastern Manitoba Hockey League has delayed the start of its regular season to Nov. 26. The seven-team league hopes to play a 12-game regular season. . . . The original plan was to play the regular 18-game season starting on Nov. 6. . . .

The QMJHL’s Drummondville Voltigeurs have lost assistant coach Mathieu Turcotte, who has left the team for personal reasons. According to Mikael Lalancette of TVA Sports, Turcotte “has health problems that put him at risk” during these pandemic times. . . . The Voltigeurs are one of the QMJHL teams that has experienced positive tests. . . .

The U of Rhode Island Rams football team has had to put things on hold after a player and a staff member tested positive. All players and staff members have been told to quarantine for two weeks. . . . The Rams have been hold light workouts as they aren’t scheduled to play until Feb. 27 as the Colonial Athletic Association chose not to play in the fall.

The Vancouver Giants are currently accepting applications for an assistant coaching position. All interested applicants are encouraged to apply via e-mail to coach@vancouvergiants.com.