A message from doctors on the front-lines of #COVID19. pic.twitter.com/3JYNNDjkgE

"The final standings for the 2019-20 WHL Regular Season are determined by using win percentage for all Clubs."

Not quite. It was determined by points percentage. If it were win percentage, Everett would be in first as they had 46W/63GP compared to Portland's 45W/63GP. https://t.co/xZMyi3UKV6

The WHL announced on Wednesday that it has cancelled what remains of its regular season. When the WHL suspended play on March 12, the 22 teams had a total of 54 games remaining before the season was to wind up on March 22. . . . The 22-team WHL still is hoping to get its playoffs in “at a later date,” according to a statement. . . . The WHL’s final standings have been “determined by using win percentage” for its teams, reads a statement from the league. Actually, as TBird Tidbits pointed out in the above tweet, the standings were determined using points percentage. That’s how the Kamloops Blazers ended up ahead of Spokane, even though the Chiefs have one more point, and how the Vancouver Giants are ahead of Victoria, even thought the Royals finished with one more point. . . . No matter. The Portland Winterhawks finished atop the heap, so are the Scotty Munro Memorial Trophy champions. . . . Even though the Everett Silvertips finished with one more regulation victory.

About those playoffs. . . . Last season, the WHL began its playoffs on March 22. They played four rounds, all best-of-seven, and finished on May 13. . . . In total, they played 80 games in about seven weeks. . . . Let’s be honest. That’s not going to happen this time around. . . . You can bet that the WHL is tossing around all kinds of playoff options, likely incorporating best-of-three and best-of-five series. . . . But in the end it’s going to come down to how much time there will be for playoffs. It could be that in Washington state and B.C., for starters, games with more than 50 people on hand will be taboo until mid-May. . . . And don’t forget that the Memorial Cup is scheduled for Kelowna, May 21-31. That is highly unlikely to happen, so how far can it be pushed back? And what about Sportsnet, the CHL’s television partner? How much room will Sportsnet have on its schedule whenever the time comes? . . . And don’t forget that if the CHL is into playoffs, the NHL will be, too. So how does all that figure into this? . . . With all that is going on, and not going on, perhaps it’s best to take a day-to-day or even a week-to-week approach. Just to help maintain sanity. . . . OK? . . .

Next up for the WHL is the inaugural U.S. prospects draft that is scheduled for March 25, and is to be run from the league office in Calgary. It’s a two-round draft featuring 44 selections, if each team uses its two picks. . . . The 2020 WHL bantam draft is scheduled for Red Deer on May 7. . . .

The OHL also cancelled its regular season on Wednesday, and announced that its 2020 draft will be held online on April 4. . . . The OHL’s regular season was to have ended on March 22. . . . Like the WHL and QMJHL, the OHL is monitoring the situation.“When it is safe and we may resume play, we will advise on the status of the 2020 playoffs,” a statement from the league reads. . . .

The QMJHL, which cancelled the remainder of its regular season on Tuesday, has taken its annual entry draft online. It was to have been held on June 6 in Sherbrooke. It still will go ahead on June 6, but now it all will be online. . . . As well, the QMJHL has cancelled its annual session that was scheduled for June 3-5. It features “meetings between its members along with hockey and administrative staffs.” . . . 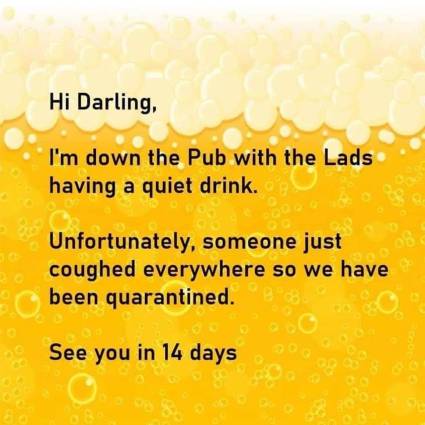 The 16-team USHL announced on Wednesday that it has cancelled the remainder of its season. The league’s board of directors made a unanimous decision to end the season, including the playoffs. . . . The regular season, which was suspended on March 12, was to have ended on March 29. . . .

Philip Rivers is taking his arm to the Indianapolis Colts for one year and something like US$25 million. I wonder who will pay the moving expenses to get his wife and their nine children to Indy? . . . Rivers, 38, told us all a while back that he wasn’t interested in returning to the San Diego/Los Angeles Chargers with whom he had spent his entire career. . . .

There was good news from South Korea on Wednesday as its top basketball league, the KBL, which hasn’t played in four weeks, announced that it has games scheduled for month’s end. . . . In the beginning, games will be played without fans in attendance. . . . If you’re curious about all of this, Jonathan Givony of ESPN has more right here. . . .

The BCHL’s Prince George Spruce Kings announced the re-signing of assistant coach Jason Garneau, who spent eight seasons with the club a few years ago. . . . At the same time, assistant coach Colin Minardi, who joined the club in October, won’t be returning to the coaching staff. . . .

Cody Reynolds is the new head coach of the U-18 Red Deer Optimist Chiefs. He has spent the past seven seasons as associate coach with the Red Deer College Kings. . . .

I think probably the biggest shock about this whole thing is that the scientists have been right and that guy I went to school with who posts on Facebook all the time has been wrong.

I feel it is only right and proper to put an end to any and all speculation that may exist on social media and elsewhere–thanks to those kind enough to put my name forward, but I wish to categorically deny any interest in coaching the Maple Leafs.

When Roy MacGregor writes, I read. Such was the case with the superb essayist’s piece on the Don Cherry situation. As we have come to expect from MacGregor, it is terrific. . . . At one point, he writes that Cherry was fired “for a last straw no one could fit into the overstuffed barn that holds all the previous last straws.” . . . It doesn’t get any better, and it’s right here.

How does that happen? 😂

ICYMI, here’s how the annual junior hugfest between CHL teams and a touring Russian side ended last Thursday in Prince Albert. The Russians won the game, but had to go to a shootout to get it done. That outcome left the series — the Russians play two games against teams from the QMJHL, OHL and WHL — all even. . . . Guess what? . . . Yes, they went to another shootout. The WHL won that one on a goal by F Nolan Foote of the Kelowna Rockets to win the series. . . . Seriously!

BTW, the CHL’s broadcast partner, Rogers Sportsnet, put that final game on one of its channels, something called 360. When that game began, Sportsnet was showing an NHL game — New York Rangers at Tampa Bay Lightning — on four other channels. ICYMI, the Lightning opened up a 4-0 first-period lead en route to a 9-3 victory.

The CHL (the Q & W especially) simply needs to do better in their national TV contract. Sportsnet doesn't care about the CHL, they have the NHL. https://t.co/kdIQcMGJNS

Tyler Yaremchuk was part of the TSN1260 broadcast crew in Edmonton on Friday when the Alberta Golden Bears skated to a 4-2 victory over the visiting Regina Cougars. . . . After the game, he tweeted: “50 straight wins for the Bears over Regina.” . . . Think about that for a moment or two . . . 50 in a row! Yikes!!! Now that’s a streak. . . . Dustin Nielson, the play-by-play voice on that broadcast team, tells me that the Golden Bears last lost to the Cougars in 2009. “Also haven’t lost at home to them since 1996,” he added. . . . Connor Hood, writing on the U of A’s website, pointed out that the streak “dates back to March 13, 2009, and includes 43 conference games, two playoff games and five non-conference games.” . . . On Saturday night, the Golden Bears ran that streak to 51 games with a 9-0 victory.

I'm so old I remember when #BlackFriday sales didn't last all month.

Running back Saquon Barkley of the New York Giants had one yard rushing on 13 carries in a recent loss to the New York Jets. . . . Dwight Perry of the Seattle Times broke that down a bit more: “To put that in perspective, that’s 2.9 per attempt — inches, not yards. Or . . . at that rate, just 117 more carries and he’d have a first down!”

By now, you may have seen video of Houston Rockets guard Austin Rivers working the referees in the hopes they would give his father, Los Angeles Clippers head coach Doc Rivers, a technical foul on Nov. 13. Officials did just that, and then they ejected him. . . . Later, on Twitter, Austin wrote: “Welp . . . Thanksgiving is going to be weird . . .”

Hey, Kamloops, I got gas in Burnaby on Saturday night for $1.24.9. That’s only five cents more than I paid in our town on Friday night.

On the way to the Lower Mainland on Saturday morning, I collapsed a hundred times, if not more. Actually, we ran into snow, sleet, ice pellets and rain, lots of rain. . . . So what’s with all the drivers who can’t be bothered to turn on their headlights to that their taillights are on?

Donald Trump could end up with a library with his name on it. That would be like a gym with Keith Richards' name on it.

Imagine the odds you could have gotten on October 1 that Don Cherry AND Mike Babcock would be fired within a week of each other and before the end of November?
Astronomical.

Mike Babcock now has been fired by two hockey teams — the Toronto Maple Leafs and the WHL’s Moose Jaw Warriors. The big difference is that the Warriors didn’t owe him about $23 million when they did the deed. . . .

Jack Todd has been writing about Don Cherry for a long time. So you knew that something was coming after Rogers Sportsnet fired Cherry. Todd’s column is right here.

I’ve seen juries at murder trials that were more relaxed than this crowd. pic.twitter.com/PZNGIkl2XS

Patti Dawn Swansson, aka The River City Renegade, hits the nail on the head right here: “Really annoying people: The 7-Eleven Guy and Matthew McConaughey. I think a perfect commercial would be the 7-Eleven Guy spilling a strawberry Slurpee on the posh seats of McConaughey’s fancy-schmancy Lincoln.” . . . There’s more right here.

JUST NOTES: Would someone at ESPN please tell Randy Moss that he is speaking into a microphone so he doesn’t need to yell at us. Thank you. . . . Gotta think the World Curling Federation will be making a rule change in the not-too-distant future after a ruling caused Norway’s men to forfeit a game to England during the European championships in Helsingborg, Sweden on Sunday. It seems Norway subbed in a curler who didn’t use the broom of the player he was replacing. Yes, that’s against the rules. There’s more right here. . . .

Going by the part of the WHL website that lists disciplinary actions, Adam Foote, the Kelowna Rockets’ head coach, hasn’t yet been fined for not doing a post-game media interview after a 5-2 loss to the Blazers in Kamloops on Nov. 11. The WHL has a rule that states a coach must be available to media 15 minutes after a game. Conspiracy theorists, have at it. . . . The NHL announced on Tuesday that the season-ending award it gives to its top GM will be named after the late Jim Gregory. There isn’t an award named for Sam Pollock, Glen Sather or Bill Torrey, each of whom put together dominant teams. Of course, the NHL doesn’t have any individual awards named in honour of Wayne Gretzky or Mario Lemieux, either. . . . Hey, TSN, I realize that Toronto is the centre of your universe. I get that. So when the Maple Leafs fire Mike Babcock, your world stops. Yes, I get that, too. But you’ve got five channels so why cut off PTI before the episode is over just to show what’s available elsewhere? Why not show the viewer — me — some respect?