Glen Hanlon (Brandon, 1974-77) signed a one-year plus option year contract as head coach of DVTK Jegesmedvék Miskolc (Hungary, Slovakia Extraliga). This is the club’s first season playing in Slovakia’s Extraliga. Hanlon was GM of the Vancouver Giants the past two seasons.

coach today. Dyck, 49, will take over from Jason McKee, who was fired by incoming general manager Barclay Parneta on June 15. At the time, Parent said he wanted a head coach “I’m more familiar with.” . . . In 2002-03, Parneta was scouting for the Giants, while Dyck was an assistant coach. . . . Steve Ewen of Postmedia has more on the story right here.

hockey operations and head coach. Brockman takes over from Manny Viveiros, who guided the Broncos to the WHL championship in May, in his second season in Swift Current, then joined the NHL’s Edmonton Oilers as an assistant coach. . . . Brockman spent the past four seasons with the Saskatoon Blades, the last two as head coach. He was fired when the 2017-18 season ended. Before joining the Blades, Brockman spent 17 seasons with the SJHL’s Humboldt Broncos. He is a four-time winner of the SJHL’s coach-of-the-year award.

After being away for 11 seasons, Brad Lauer is returning to the WHL, this time as the

head coach of the Edmonton Oil Kings. His signing was announced on Wednesday. Lauer replaces Steve Hamilton, who was fired on May 28. Hamilton had been on the Edmonton coaching staff for eight seasons, the last eight as head coach. . . . Lauer, 51, is a former WHL player and coach. He played three seasons (1983-86) for the Regina Pats, before going on to a pro career that ended after the 2001-02 season. His NHL career comprised 323 regular-season and 34 playoff games. . . . He spent five seasons (2002-07) as an assistant coach with the Kootenay Ice and has NHL coaching experience with the Ottawa Senators, Anaheim Ducks and Tampa Bay Lightning. For the past three seasons, he was an assistant coach with the Tampa Bay Lightning. . . . Derek Van Diest of Postmedia has more on the Lauer hiring right here.

The Oil Kings also introduced Kirt Hill, 30, as their president of hockey operations and general manager. He takes over from Randy Hansch after he and the Oil Kings parted company. . . . Terry Jones of Postmedia has more on the Hill hiring and the state of the Oil Kings right here. 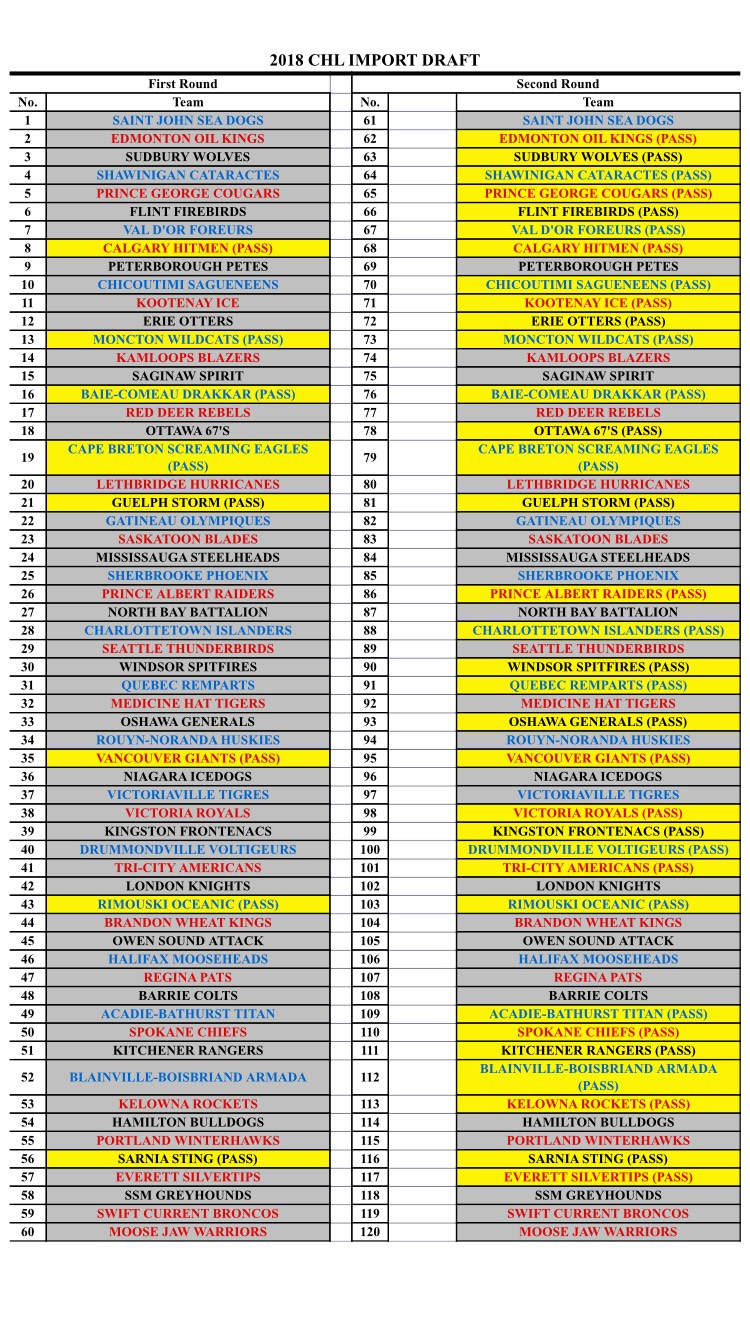 As of late Wednesdsay night, 52 of the 60 CHL teams were poised to pick in the first round, with 27 of them to take part in the second round.

The CHL finally made official on Wednesday what has been widely reported for weeks now. According to a news release: “For the first time since 2013, goaltenders will be eligible for selection in the CHL import draft, in addition to forwards and defencemen.”

Brandon Wheat Kings — They have released Czech D Daniel Bukac, 19, freeing them to make two selections. The Wheat Kings also hold the CHL rights to Czech F Martin Kaut, who was selected by the Colorado Avalanche in the first round of the NHL’s 2018 draft. Because he was a first-round pick, the Wheat Kings are allowed to make that second pick in the import draft.

Calgary Hitmen — D Vladislav Yeryomenko (Belarus) and D Egor Zamula (Russia) both will be back, so the Hitmen will sit out the import draft.

Everett Silvertips — With F Martin Fasko-Rudas (Slovakia) returning, the Silvertips have room for one import. D Ondrej Vala (Czech Republic), who finished with Everett last season, is 20 and is expected to play in the Dallas Stars’ organization.

Kamloops Blazers — They traded Vala to Everett in January and have released F Justin Sigrist (Switzerland), so are expected to pick twice.

Kelowna Rockets — They are bringing back D Libor Zabransky, but have released F Marek Skvrne, so they will make one selection. Both players are from Czech Republic.

Kootenay Ice — With F Martin Bodak (Slovakia) unsure whether he will return, the Ice is expected to make one selection as it looks for an import to join F Gillian Kohler (Switzerland). Bodak, 20, would be a two-spotter should he return, so there’s that, too.

Lethbridge Hurricanes — D Igor Merezhko (Ukraine) is 20, so would be a two-spotter were the Hurricanes to keep him. They have released F Yegor Zudilov (Russia), so will make two selections.

Medicine Hat Tigers — D Linus Nassen (Sweden) is preparing for his 20-year-old season, but would be a two-spotter. D Kristians Rubins (Latvia) was a two-spotter last season so has aged out. The Tigers are expected to pick twice.

Moose Jaw Warriors — They had two Russians last season — D Oleg Sosunov and D Dmitri Zaitsev — both of whom now are 20. Neither is expected back and the Warriors are expected to make two selections.

Portland Winterhawks — F Joachim Blichfeld (Denmark) is 20 and should play in the San Jose Sharks organization. D Henri Jokiharju (Finland), 19, was a first-round selection by the Chicago Blackhawks in the 2016 NHL draft. The Winterhawks, then, will be making two selections.

Prince Albert Raiders — They will make one selection. D Sergei Sapego (Belarus) will be back, but D Vojtech Budik (Czech Republic) is 20 and won’t be returning.

Prince George Cougars — F Vladislav Mikhalchuk (Belarus) is expected back for his sophomore season, so the Cougars are preparing to make one selection. F Pavel Azhgirei (Belarus) won’t return.

Red Deer Rebels — F Kristian Reichel (Czech Republic) is 20 and his future is up in the air, while D Alex Alexeyev (Russia) will be back after being a first-round selection by the Washington Capitals in the NHL’s 2018 draft. Because of the situation, the Rebels are eligible to make two picks.

Saskatoon Blades — D Mark Rubinchik (Russia) has signed to play with a KHL team, leaving the Blades to make a pair of picks.

Seattle Thunderbirds — They also will make two selections, having released F Nikita Malukhin (Russia) and with F Sami Moilanen having signed with a pro team in Finland.

Swift Current Broncos — D Artyom Minulin (Russia), 20, will be a two-spotter should they bring him back, while F Aleksi Heponiemi (Finland) has signed to play at home. Thus, the Broncos are expected to make two picks.

Tri-City Americans — They’ll make one selection as they try to find an import to join D Roman Kalinichenko (Russia), who returns for a second season. D Juuso Valimaki (Finland) turns 20 on Oct. 6, but should be in the Calgary Flames organization.

Vancouver Giants — They’ll pass as they plan on going with F Milos Roman (Slovakia) and F Yannik Valenti (Germany), a 2017 import draft pick who signed with them on March 9.

Victoria Royals — The Royals have F Igor Martynov coming back, while they have released F Andrei Grishakov (Russia). Therefore, they will make one selection.

Work is underway at Mosaic Place, the home of the Moose Jaw Warriors, to upgrade the

boards and glass. The Warriors announced Wednesday that they will share the $446,313 cost with the DFFH (Downtown Facility and Field House). . . . “This new CrystalPlex dasher board system is in the best interest of player safety and will benefit not only our WHL players, but all users of the facility,” Alan Millar, the Warriors’ general manager, said in a news release. . . . The upgrades are scheduled to be finished in time for the 2018-19 season.

Wednesday that Evan Richardson, their play-by-play voice, and analyst Andy Kemper have stepped aside, both of them citing a desire to spend more time with family. . . . Richardson spent one season calling Winterhawks’ games. He has decided to return to his hometown of Toronto. . . . Kemper began his broadcasting career in 2004, alongside the legendary Dean (Scooter) Vrooman. He will continue to be part of the Winterhawks organization as the team historian.

G Connor Ingram, who played with the Kamloops Blazers, spent last season with the Syracuse Crunch, the AHL affiliate of the NHL’s Tampa Bay Lightning.

After the tragedy involving the SJHL’s Humboldt Broncos, Lukas Favale, the Crunch’s radio voice, pledged $1 to the fundraising attempts for every save made by Ingram from then through the end of the AHL playoffs. Ingram immediately said he would match that total.

Earlier this month, F Kaleb Dahlgren of the Broncos and Ingram took part in a cheque presentation with some folks from STARS Ambulance.

We went to Dayna's office/treatment room yesterday and saw this sign on the wall. Don't know where it came from. She conducted herself accordingly. Always did. pic.twitter.com/eStJMSA0Q1