WHL commissioner Ron Robison will announce 2020 Memorial Cup bid winner at about 2:40 p.m. #Kamloops time on Wednesday in Calgary. @blazerhockey, @Kelowna_Rockets and @WHLHurricanes to make final pitches to #WHL board of governors before vote tomorrow. 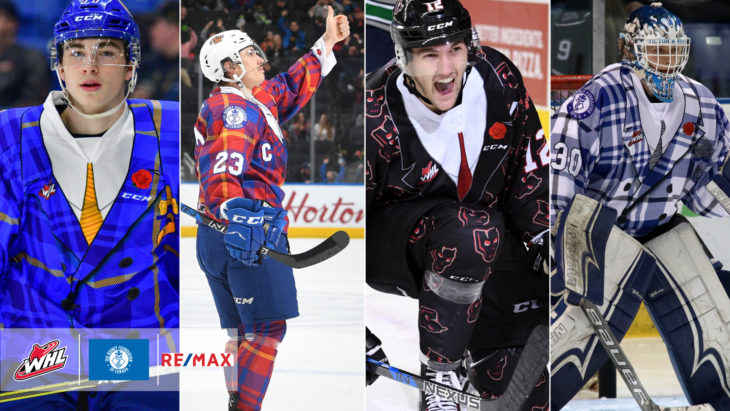 The WHL revealed on Sept. 20 that it will partner with RE/MAX of Western Canada again this season for the second annual WHL Suits Up with Don Cherry to Promote Organ Donation. On Tuesday, the WHL released the full details of the promotion.

Last season, it raised $265,500 that, according to a WHL news release, represents “the largest public awareness and fundraising campaign in the history of the Kidney Foundation of Canada.”

According to the news release: “From January through March 2019, all 17 WHL clubs in Canadian markets will play host to their very own themed games, complete with a variety of special promotions for fans in attendance. A total of 1,000 limited second edition Don Cherry bobbleheads will be distributed to fans in attendance. . . .

“During the 2018-19 regular season, WHL teams will sport their own unique and specially designed Don Cherry-themed uniforms on a designated game night. This season, players will sport uniforms emblazoned with fun nicknames as opposed to traditional surnames across their shoulders. Fans will have the opportunity to bid on the limited-edition jerseys, with 100 per cent of the proceeds going to local chapters of the Kidney Foundation of Canada. In addition to game-worn uniforms, fans will have the chance to bid on one Don Cherry-autographed jersey in each participating WHL market.”

Why is Don Cherry involved? Because his son, Tim, and daughter, Cindy, are well aware of kidney disease and the impact it can have on a family. Tim, then 13, received a kidney from Cindy in 1978.

Here are the dates for the WHL games:

For more info or to sign up to be an organ donor, please visit CanadaDonates.ca.

The Saskatoon Blades, with two defencemen down and an opening for a 20-year-old, have acquired veteran D Brandon Schuldhaus from the Moose Jaw Warriors.

The Blades gave up a fifth-round selection in the 2019 WHL bantam draft and a second-round pick in 2020. Both picks originated with the Blades; they have two other second-rounders in 2020, from the Regina Pats and Swift Current Broncos.

The 6-foot-4, 205-pound Schuldhaus is joining his fourth WHL team, having also played for Moose Jaw, the Red Deer Rebels and Seattle Thunderbirds. He was a fifth-round pick by Seattle in the 2013 bantam draft. . . . In 189 regular-season games, he has 12 goals and 35 assists.

The Warriors acquired Schuldhaus and a fourth-round pick in the 2020 bantam draft from Red Deer on Jan. 5, sending second-round selections in the 2019 and 2020 drafts to Red Deer.

This season, he was pointless in one game with Moose Jaw after missing the first three games of the regular season as he served a suspension left over from last season’s playoffs.

Born in Houston, Texas, Schuldhaus is a dual citizen of Canada and the U.S. . . . His grandfather, George Kirkwood, is from Edmonton and played for the Oil Kings (1955-57) when they were a junior A team.

The Blades opened an Alberta road swing with a 5-4 loss in Red Deer on Tuesday night. Saskatoon was without D Seth Bafaro and D Jackson Caller, both out with undisclosed injuries.

Schuldhaus is expected to make his Blades’ debut in Edmonton against the Oil Kings on Wednesday.

Meanwhile, the trading of Schuldhaus allowed the Warriors to get down to three 20s — D Dalton Hamaliuk, F Tristin Lang and G Brodan Salmond.

21 year pro career
Hall of Famer
9 Stanley Cups
So… What's YOUR reason for not helping out? https://t.co/WFC1FCfSgy

The Prince Albert Raiders received an upgrade to their offence on Tuesday when the NHL’s San Jose Sharks sent F Noah Gregor, 20, back to the WHL. . . . The Sharks selected

him in the fourth round of the NHL’s 2016 NHL draft and have signed him to a three-year entry-level deal. . . . Gregor, from Beaumont, Alta., had been in camp with the Sharks’ AHL affiliate, the San Jose Barracuda. . . . The Raiders acquired Gregor from the Victoria Royals on July 25 for a conditional third-round pick in the 2019 bantam draft and a conditional fourth-rounder in 2021. The conditions are triggered by point totals and games played. The Royals could end up with none, one or both picks depending on how Gregor does this season. . . . The Royals selected him in the third round of the 2013 bantam draft, later dealt him to the Warriors, then re-acquired him. . . . He split last season between Victoria and the Moose Jaw Warriors, totalling 29 goals and 36 assists in 60 games. In 194 career regular-season games, he has 205 points, including 86 goals. . . . Gregor also has played in 28 playoff games, recording 11 goals and 12 assists. . . . The Raiders open a Central Division swing tonight (Wednesday) in Medicine Hat and should have Gregor in their lineup against the Tigers.

Feel free to scoot on over to my Twitter timeline (@gdrinnan) and vote on a 2020 Memorial Cup-related poll that I posted on Tuesday night.

D Artyom Minulin, a 20-year-old Russian, is on his way back to the Swift Current Broncos after having had off-season shoulder surgery.

Minulin flew into Edmonton on Tuesday. He will travel to Calgary to do the necessary

immigration-related stuff, then rejoin the Broncos so that their medical team can check him over and determine how close he is to returning to action.

He has played three seasons with the Broncos, putting up 26 goals and 100 assists in 206 games. Last season, he had 13 goals and 30 assists in 64 regular-season games, then added a goal and seven assists in 20 playoff games.

When Minulin is added to the active roster, the Broncos will be carrying four 20-year-olds — the others are F Andrew Fyten, F Tanner Nagel and D Matthew Stanley — and three imports, the other two being freshman Finnish forwards Joona Kiviniemi and D Roope Pynnonen.

When Minulin does return, the Broncos will have 10 days to make a decision on their 20s. They also would have to get down to two imports by moving Minulin or releasing one of the other two. The window to trade first-year imports doesn’t open until Dec. 15.

The Broncos moved out a 20-year-old on Tuesday when the Vancouver Giants, who

Pouliot was born in Ottawa, but played some minor hockey in B.C.’s Lower Mainland, with the North Shore and Burnaby winter clubs. . . . The Broncos had claimed him on waivers from the Kootenay Ice during the off-season. . . . In 172 regular-season games — 14 with the Red Deer Rebels, 155 with Kootenay and three with the Broncos — he has three goals and 27 assists. . . . The Saskatoon Blades selected him in the 11th round of the WHL’s 2013 bantam draft.

Pouliot is expected to be in the Giants’ lineup tonight (Wednesday) when they meet the Rockets in Kelowna.

The Giants now have four 20-year-olds on their roster — Pouliot, Barberis, F Jared Dmytriw and F Davis Koch. Once Barberis returns, they will have 10 days to get down to three.

Stan Butler, the director of hockey operations and head coach of the OHL’s North Bay Battalion, has taken a medical leave while he deals with an undisclosed health issue. . . . Butler wasn’t behind the team’s bench on Sunday when they dropped a 6-1 decision to the Generals in Oshawa. . . . Adam Dennis, the assistant general manager and assistant coach, will handle the director of hockey operations’ duties, while Scott Wray, an assistant coach, will look after the coaching side of things. . . . Butler, the fourth-winningest head coach in OHL history, is into his 21st season with the Battalion. He spent one season (1996-97) as head coach of the WHL’s Prince George Cougars.

period deficits en route to a 5-4 victory over the Saskatoon Blades. . . . The Blades have lost two in a row after opening the season with three straight victories. . . . The game featured two PP goals by each team. . . . F Jeff de Wit scored twice for Red Deer. He’s got five goals in six games; he finished last season with 11 goals in 43 games split among the Regina Pats, Kootenay Ice and Victoria Royals. . . . Red Deer D Alex Alexeyev had two assists to run his point streak to six games.

F Jaret Anderson-Dolan, who spent the past three seasons with the Spokane Chiefs, remains on the roster of the NHL’s Los Angeles Kings as they prepare to open the regular season on Friday against the visiting San Jose Sharks. . . . Anderson-Dolan, 19, was a second-round pick by the Kings in the NHL’s 2017 draft. . . . From Calgary, he had 91 points, including 40 goals, with the Chiefs last season. In 212 regular-season games, he has 193 points, including 100 assists. . . . He has signed with the Kings, so is able to play nine games before the first year of his contract kicks in. . . . The Kings will be without F Dustin Brown (broken finger, four-to-six weeks), which may have opened the door for Anderson-Dolan to claim a roster spot. . . . The last two spots on the Kings’ 22-man roster went to Anderson-Dolan and F Austin Wagner, 21, a speedster who played four seasons (2013-17) with the Regina Pats.

The Regina Pats have signed D Jake Johnson, 15, who was a 10th-round selection in the 2018 WHL bantam draft. From Scottsdale, Ariz., he played the past two seasons with the bantam Phoenix Jr. Coyotes. This season, he is expected to play with the Jr. Coyotes U15 in the T1EHL.

Feel free to click on the DONATE button over there on the right and add to the Taking Note coffee fund. One person helped us out on Tuesday and we thank him for that.

My Tweets
Join 4,622 other followers