Friendly reminder that 16 years ago today (May 19, 2003) the name "East Coast Hockey League" was retired. The letters in "ECHL" don't stand for anything at this point. Just call it the ECHL. 👍

F Killian Hutt (Portland, Regina, Swift Current, 2008-11) has signed a one-year contract extension with Herford (Germany, Regionalliga). This season, in 32 games, he put up 49 goals and 83 assists. He led the league in assists and points. . . .

D Ryan Button (Prince Albert, Seattle, 2007-11) has signed a two-year contract with Grizzlys Wolfsburg (Germany, DEL). This season, with Red Bull Munich (Germany, DEL), he had three goals and 14 assists in 48 games. He is a dual German-Canadian citizen.

F Tyler Hinam’s second goal of the game, at 15:28 of the third period, broke a 3-3 tie and sent the QMJHL-champion Rouyn-Noranda Huskies on their way to a 6-3 victory over the 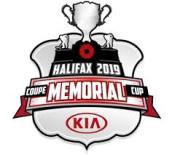 WHL-champion Prince Albert Raiders at the Memorial Cup tournament in Halifax. . . . The Raiders (0-2) are to play the OHL-champion Guelph Storm (1-1) tonight. A loss would eliminate the WHL champs. . . . The Raiders haven’t lost three straight games this season. . . . The host Mooseheads (2-0) and the Huskies (1-1) conclude the round-robin portion of the tournament on Wednesday. . . . With the score 3-3, Huskies D Noah Dobson seized a neutral zone turnover and took the puck down the right side and go it to the net, from where Hinam, who is from Cole Harbour, N.S., beat G Ian Scott. . . . F Peter Abbandonato added insurance at 16:53, and Dobson got the empty-netter at 18:19. . . . F Noah Gregor, perhaps the best player on the ice, had a goal and two assists for the Raiders. . . . F Cole Fonstad and D Brayden Pachal added a goal each for the Raiders. . . . The Huskies were 1-3 on the PP; the Raiders were 0-3. . . . Each team hit three or four posts in a game that featured a lot of scoring chances. . . . Huskies G Sam Harvey blocked 30 shots, three more than Scott.

Here’s how Jeff D’Andrea of paNOW.com explained the situation in Halifax: “If the Raiders beat the Storm on Tuesday and the Huskies (1-1) defeat the Halifax Mooseheads (2-0) on Wednesday, then the Raiders and Storm would play a tiebreaker on Thursday. But if the Raiders defeat the Storm and the Mooseheads beat the Huskies, then there would be a three-way tiebreaking scenario between the Storm, Raiders and Huskies who would all have records of 1-2. A Raiders loss would be the end to their tournament.”

It's been 3 years, 11 months, and 26 days since the WHL Champions have won a Memorial Cup game.#2019MemorialCup

The MJHL’s Winnipeg Blues are looking for a head coach after announcing on Monday that they and head coach Billy Keane “have agreed to part ways.” . . . Keane had been an assistant coach with the Blues for six seasons (2010-16) when he took over as head coach prior to the 2016-17 season. He was the general manager and head coach each of the past two seasons. . . . Keane, who is from Winnipeg, is a brother to former WHL/NHL F Mike Keane. . . . The Blues were purchased in April by 50 Below Sports and Entertainment, the owners of the WHL’s Kootenay Ice. On May 14, Taras McEwen, the Ice’s manager of scouting and hockey operations, was named the Blues’ GM. . . . At that time, Keane told Mike Sawatzky of the Winnipeg Free Press that “I’m definitely interested” in staying on as head coach.

Plenty of good feedback about the suggestion all rinks need these signs. They also need lanes for people to be able to walk along concourse during intermission. Those lanes are NOT for people to just stand there and chat. Move off to the side. pic.twitter.com/yZcmyeuXzO