To a person experiencing kidney failure, there are a number of advantages to being fortunate enough to get a transplant from a live donor.

“The organ donation and transplant surgeries can be scheduled when both the donor and recipient are in the best possible health. This will help to ensure the quality of the donated kidney is at its highest. The amount of time between removing the kidney from the donor and transplanting it into the recipient is shorter than for a deceased donation. This may help the transplanted kidney to function better and/or last longer.

There also are some other advantages, as pointed out on the Foundation’s website:

“A transplanted kidney from a living donor often lasts longer. This is partly due to more time being available to do the necessary tests to get a better tissue match between donor and recipient. A better tissue match means higher compatibility and less risk of organ rejection.

“The kidney from a living donor is usually healthier than an organ from a deceased donor and may last longer: 15 to 20 years on average, compared to 10 to 15 years for a deceased kidney donation. This is largely because extensive testing is done on the donor to ensure the donor has excellent kidney function.

And let’s not forget about this: For the donor, it is a very positive psychological experience knowing that he or she has helped someone in need.”

All of which brings us to the story of John Glenn Miller of Vancouver and Cheryl Vosburgh, who lives in Kamloops.

“Two years ago,” writes Cheryl Chan of Postmedia, “John Glenn Miller pushed through his embarrassment and discomfort to make a plea online for a new kidney. Today, he’s a new man — thanks to a priceless gift from a stranger.”

Vosburgh was that stranger.

A story about Miller, who has 12-year-old twin sons, appeared in a Vancouver newspaper in April 2017. He needed a kidney. As he waited and hoped that a match would somehow be found, and while he was on dialysis, Vosburgh made the decision to donate a kidney.

In researching the issue of kidney donation, she came across that 2017 story about Miller. Things worked out and the surgery was performed at Vancouver General Hospital on Aug. 21.

Chan’s story can be found in the tweet that is below.

Vosburgh, 59, lives in Kamloops and attended her first Kamloops Kidney Support Group gathering exactly three weeks after having had surgery. We were an enthralled group as we listened to her tell her story.

She also said that she wants to continue to advocate for organ donation and transplantation. If you are thinking about being a live kidney donor and have any questions, email me at greggdrinnan@gmail.com and I will get you in touch with Vosburgh.

'She changed my life': Pitt Meadows man receives new kidney from stranger. https://t.co/98ITmp9qzh We love happy follow-up stories like this! @cherylchan in the @VancouverSun 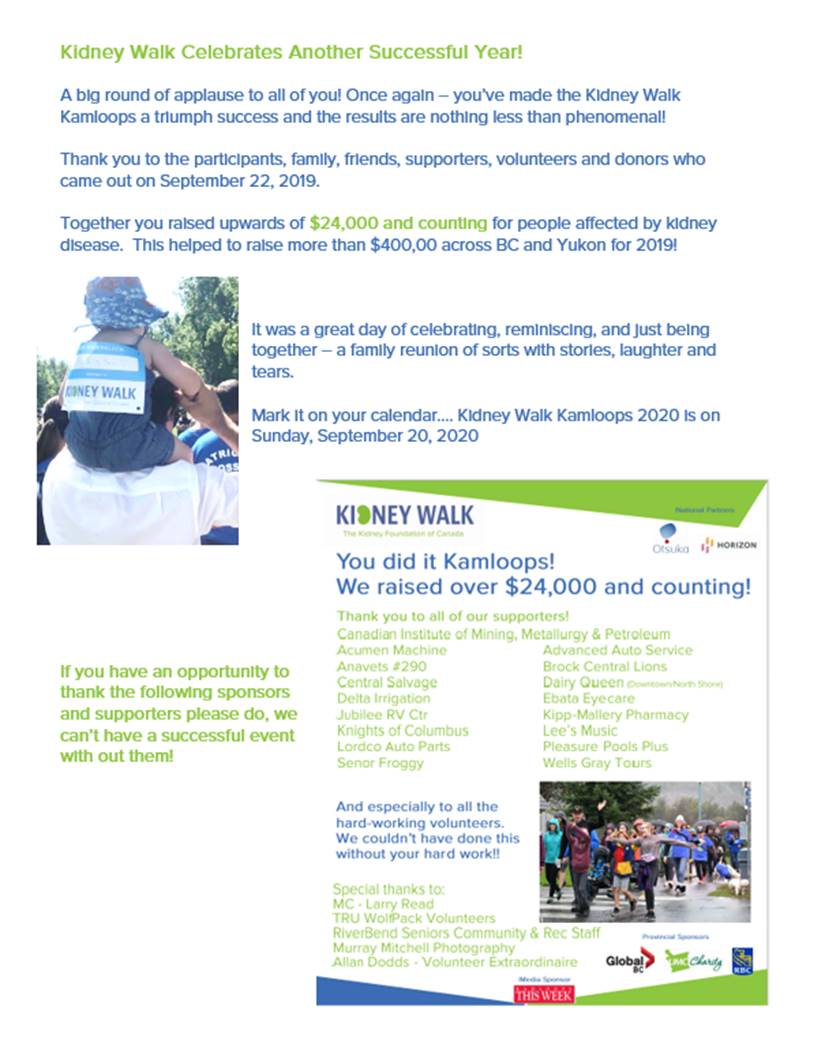