Ryan McLennan, a teacher in Calgary, needed a kidney. So his wife mounted a billboard campaign. . . . Tony Timmons, a FedEx driver, saw one of the billboards. . . . Timmons, originally from Gander, Nfld., answered the call. . . . Shawn Logan of Postmedia has the entire story — and it’s a good one — right here.

I have been hearing about people doing hemodialysis and getting some exercise at the same time for a year or so now. I’m thinking this is going to become more and more common in dialysis units.

IN THE NEWS! 📰📣 Calgary doctor researching effects of exercise during dialysis. Patients and caregivers are benefiting from new remote controlled chairs that allow them to use stationary cycles for exercise while receiving treatment.https://t.co/p2WejnWQoy 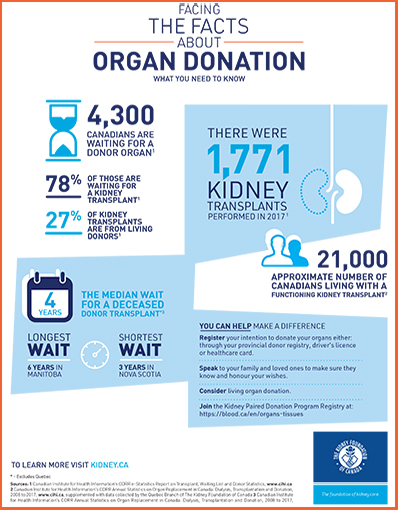 Photos for Kidneys is a stunning project created by photographer Debra Matwychuk. She tells the stories of kidney transplant recipients, donors, and Canadians in need of kidneys. Visit https://t.co/LaohMz27bv to see more, read more or become the next face. #organdonation pic.twitter.com/Sd2Y4DG2vc

From the website photosforkidneys.com: “If you’re waiting for a kidney transplant, or have had one in the past, or if you’re a kidney donor yourself, please feel free to contact us if you would like to participate in our photo project. We would love to meet you!”

Jim (2015 kidney recipient) and his wife Renee both won two bronze medals in the BC Seniors Games in Kelowna last month. A great accomplishment in the 75-79 age category for the 100M and 50M races. We wish him great health and luck next year at the Canadian Transplant Games! pic.twitter.com/LAYO3JndFA

Wow, what a wonderful time we had at our inaugural South Asian Starry Night benefit! The room was filled with engaged and engaging people. Thank you for raising close to $50,000 for organ transplant research and kidney patients in BC and Yukon. Photos: https://t.co/e8k0yg3owR pic.twitter.com/7nV2t6wdu1

IN THE NEWS! 📰📣 ‘I just want to come home’: Peterborough kidney transplant recipient. Ken Sharp is off dialysis for the first time in 43 years. https://t.co/IM4jx0Udwc pic.twitter.com/1xYJoCAwgr

IN THE NEWS! 📰📣 ‘We’ll be bonded forever’: man donates kidney to fellow firefighter. Wolf is donating his kidney to Connor, who has been living with the disease IGA nephropathy since 1998.https://t.co/3AHMhUiCHG

Told the wife of my organ donor patient that we found a recipient for his heart. She broke down and told me “you make sure that the recipient knows that they not only have his heart but mine too” 😭😭 this job is HARD! #organdonation #allthetears #donatelife