A couple of weeks ago, I spent some time in this space writing about Cypress Roed, an eight-year-old from Harrison Hot Springs, B.C., who, at that time, was preparing for a kidney transplant.

Cypress had the transplant on schedule, on Oct. 24, and now is recovering at B.C. Children’s Hospital in Vancouver.

Her mother, Chantelle Deley, told me on Saturday that Cypress “is doing well.”

There have been a couple of early issues but nothing that the medical people haven’t been able to handle.

If you missed the earlier story on Cypress, it’s right here.

HOLY TORPEDOES! What a night!

November 2, 2019 will forever be Dean “Scooter” Vrooman day in Portland. 👏

The Portland Winterhawks and their fans celebrated the career and retirement of Dean (Scooter) Vrooman as they beat the visiting Seattle Thunderbirds, 2-1, on Saturday night. . . . He was the voice, and the face, of the Winterhawks for a whole lot of years. . . . Allow me to offer my congratulations to an old friend, and here’s hoping retirement is as kind to you as it has been to me. . . . Paul Danzer of the Portland Tribune has more right here, including the hilarious story on how Vrooman got his nickname.

Saturday night is Dean "Scooter" Vrooman Night as the @TheWHL @pdxwinterhawks take on the @SeattleTbirds in the Coliseum. Here's an article from the Tribune's Paul Danzer about The Scooter's 32 years with the Winterhawks: https://t.co/EdESREhRQZ

One more from Perry: “Somebody just carried out the best fake play of the football season. A red-faced ESPN Events ‘terminated’ its three-week-old agreement with DreamHouse to be the New Mexico Bowl’s presenting sponsor after realizing the purported film-production company doesn’t even exist.”

The other night, I spent 90 minutes watching the documentary Searching for Sugar Man. I have seen it numerous times but it continues to amaze me. If you aren’t familiar with the story of Detroit musician Sixto Rodriguez and his influence on the people of South African, check it out. You can thank me later.

Sheesh, TSN, all I want as a viewer is some respect. With the Washington Nationals on a magical run, you let us watch PTI until the day after the World Series ended. Then you cheated us out of watching Tony Kornheiser celebrate. How could you? . . . You bumped PTI for ATP Tennis, but couldn’t find room for it on one of your other four channels. Please, just a little respect and some continuity in your programming. Is that too much to ask? . . . On second thought, don’t worry about it. I have discovered PTI on YouTube, so I won’t need to check your multi-channel setup anymore.

ICYMI, the BCFC’s Langley Rams will be the host team when they meet the PFC’s Saskatoon’s Hilltops for the Canadian junior football title on Nov. 16. The Rams took out the Westshore Rebels, 35-12, in one national semifinal on Saturday. Later in the day, the Hilltops dumped the host London Beefeaters, 51-1. . . . The Hilltops will be looking for their sixth straight national championship. Yes, they qualify as a dynasty. . . . One year ago, in Saskatoon, the Hilltops whipped the Rams, 58-21, in the final. The Hilltops also beat the Rams in the 2012 and 2014 finals. 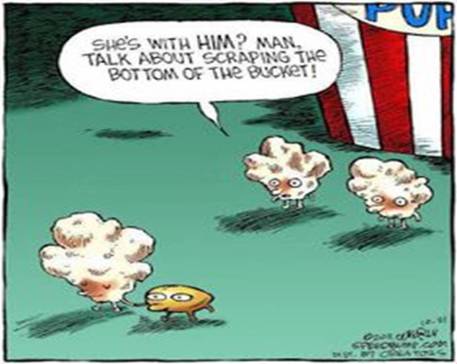 “The Christmas turkey will be served early this year,” writes Janice Hough of LeftCoastSportsBabe.com, noting that the Miami Dolphins (0-7) and Cincinnati Bengals (0-8) are to play on Dec. 22.

The Winnipeg Jets recalled F C.J. Suess from the AHL’s Manitoba Moose on Friday. His nickname had better be Cat or Horton or even Doctor. But, this being hockey, I am betting it’s something like Suessy. . . . Actually, his surname is pronounced CEASE. . . . Interestingly, he was C.J. Franklin — yes, teammates called him Frank — when he began his college career with the Minnesota State Mavericks. He has since changed it to Suess, his mother’s maiden name. . . . In a story posted in January, Jamie Thomas of WinnipegJets.com reported that new nicknames in circulation were Seeser, C-Joe and Sweets.

Lori Loughlin passed on a plea deal that would have given her two weeks in jail and is now pleading not guilty and facing up to 60 years in jail.

Lori is now regretting retaining Rudy Giuliani as her attorney.

So . . . it was Leon Draisaitl, Connor McDavid and the Edmonton Oilers against Sidney Crosby and the Penguins in Pittsburgh on Saturday. The Oilers are said to have won, 2-1 in OT. . . . If you’re a hockey fan, you know that is as good a matchup as you will see all season long — or until these teams meet again. . . . So, NHL, why would you schedule this game for a Saturday afternoon? That is a prime-time game if ever there was one. . . . BTW, the next time these teams are to meet will be on Dec. 20 in Edmonton. Yes, it will be a night game.

Hey, Andy Murray and Glen Williamson . . . your buddy has come a long, long way from Souris and the Chocolate Shop. . . . Don’t believe me? Check out the link in the tweet. . . . Yes, the big, big pizza chains will be calling soon.

Going to stop for pizza on the way in our boss' neighborhood?

Stop driver for cell phone use. When issued $280 fine, driver accelerates at high rate of speed. Vehicle continues to speed up into school zone. Lock his speed on radar at 50 km/hr. Stop driver again and issued $310 fine. @reginapolice #yqrtraffic pic.twitter.com/GxRUbUnesz

A tip to junior hockey players being interviewed before or after games — if you must wear a cap, wear it with the bill to the front. Not only does it look more professional, but it also shows off your team’s logo.

Donald Trump is moving his official residency from New York to Florida.

This is to save money on the state taxes that he doesn't pay.

JUST NOTES: Had a friend who had just seen some video from a Winnipeg Ice home game in which fans seemed to be in scarce supply suggest that the WHL should move the team to Chilliwack. . . . Another WHL fan emailed me this: “I just watched the highlights of the Lethbridge-Winnipeg game on the WHL site. Couldn’t see too much of the seats with the camera angles they had, but I bet MJHL teams get better crowds than that. Instead of putting a team in a city that already has NHL, AHL, and MJHL plus Junior B teams, the WHL should have put the team in a place where it was the biggest attraction in town.  A place like . . . Cranbrook!” . . . On the subject of the Ice, does anyone know how the new arena in which the team will play is coming along? . . . Hey, Sportsnet, those virtual ads that you put on the glass during hockey games are absolutely awful. You’re welcome. . . . The New York Yankees chose not to re-sign Edwin Encarnacion and his parrot, so do the Toronto Blue Jays bring him back? . . . Do you ever wonder what Brian Burke’s hair looks like when he first wakes up in the morning?