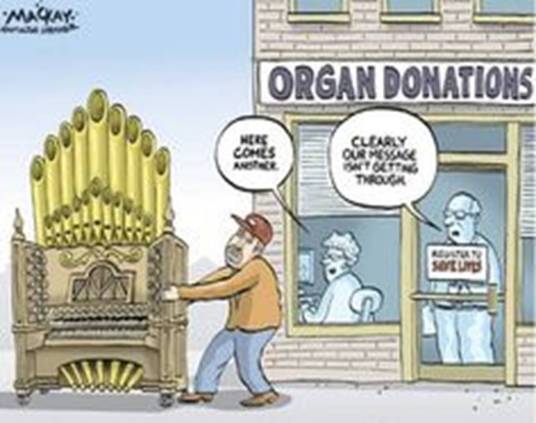 André Picard, a healthy reporter and columnist with The Globe and Mail, had an interesting story on Saturday. The print story was headlined ‘Giving life, and a bit of liver, to a stranger,’ while online it carried this headline: ‘Meet the Chopped Livers — altruistic Canadians who have donated a part of their livers to strangers to save lives’ . . . The story mostly deals with people who have chosen to donate a piece of their liver to those in need. . . .

“Given the dire shortage of organs for transplant — there are 3,150 Canadians waiting for a kidney and 527 waiting for a liver — public appeals are on the rise.

“That makes many clinicians and ethicists uncomfortable. They worry that desperately needed organs will go to those with compelling stories rather than those most in need, as illustrated by the case of Eugene Melnyk, the owner of the Ottawa Senators, who received a liver transplant in 2015 after a public appeal.

“More than 500 people offered to donate a part of their liver to Mr. Melnyk, and 20 of them actually continued with the process to become living donors.”

After the response to Melnyk’s appeal in 2015 and the ensuing successful transplant, I sometimes wondered how many of the potential donors had gone ahead even after not being selected to help him. Now I know.

IN THE NEWS! 📰📣 (Part 1 of 3) Cristina Howorun’s journey of getting a new kidney through a living donor. In part one of her series, she explains what happened before her transplant, and why they didn’t remove her non-functioning kidney.https://t.co/X76IXht8rl

IN THE NEWS! 📰📣 (Part 2 of 3) Cristina Howorun on what life’s like after a kidney transplant. She shares the life-changing journey from dialysis treatment, to adjusting to a new lifestyle, and even the scars she has learned to embrace.https://t.co/UsKjBHEMOm

IN THE NEWS! 📰📣 (Part 3 of 3) The decision to be a living donor. In the final installment of Cristina’s series, she introduces us to the woman who gave her a kidney – and a new lease on life.https://t.co/AksyzFYwMJ

ICYMI: “He is someone else’s answered prayers. Today, families in some waiting rooms just like us here, they’re going to get great news. God is still in business, and somebody’s prayers, many people’s prayers were answered. And it’s because of him.” https://t.co/Y2ypGR8O74

This is an easy resolution to make and keep.

In NL you register as an organ donor on your MCP card (fill out the same form to change your address and indicate you want to become a donor).

Afterwards simply make sure your loved ones know your wishes. https://t.co/67UnL24GGl

We’ll be back next year! Happy New Year!!!