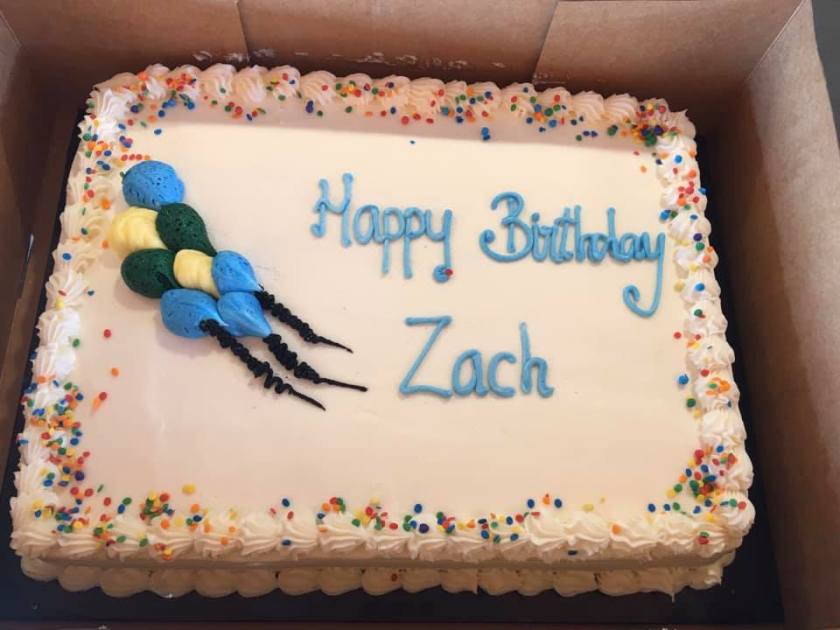 Well, he was in Vancouver. But, of course, a lot of places for celebrations in the big city are shut down or takeout only.

Oh, and he also had to spend part of his day doing dialysis.

But there still was cake and goodies and lots of fun at Ronald McDonald House.

Zach is from Robson, B.C., which is across the Columbia River from Castlegar. He and his mother, Jana, have been in Vancouver since early in January. He spent some time in B.C. Children’s Hospital, where they transitioned him from peritoneal dialysis (PD) to hemodialysis.

Now that he’s on hemo, he won’t be able to do dialysis at home, something he did while he was doing PD.

The reason he and his mother haven’t been able to return home is that Zach will have to travel to the Kootenay Boundary Regional Hospital in Trail to do hemo, but . . .

“We were told Trail doesn’t accept patients who are not 17 years old plus a day,” Jana told Gord McIntyre of Postmedia in February. “Zach turns 17 on March 18.”

The dialysis unit in Trail has eight chairs and there apparently have been discussions about adding a ninth, which would ease some of the load there.

Of course, in a perfect world, Zach would have gotten word on his birthday that a donor had been found. As it is, we still wake up every day hoping that a match has been discovered.

In the meantime, Zach and Jana remain in Vancouver. But, as Jana points out, considering the situation in which we find ourselves these days that may not be a bad thing.

“We are thinking he’s safer here for now where he is still child priority,” she told me. “Going home means doing dialysis in a unit of older people mostly and it’s not the safest place for him to be. Here he gets good dialysis and is near a children’s hospital as this virus spreads.”

It takes courage to ask others for help – and there's no bigger ask than asking for a #kidney. Here are some tips on taking that step. #BigAskBigGive https://t.co/W2c8wypqrO

IN THE NEWS! 📰📣 'Favourite' school bus driver gets kidney donation from former passenger. After waiting almost two years since learning they were a perfect match, Natalie Woods will donate one of her kidneys to her former school bus driver, Pat Jepson.https://t.co/tZYk5rRH17

IN THE NEWS! 📰📣 3 couples donate kidneys to each other in miracle match. The six surgeries took place in January in side-by-side operating rooms at Scripps Green Hospital in La Jolla, California.https://t.co/ha2Z36t2L9