Les Lazaruk will be back for his 29th season of calling the play-by-play of Saskatoon Blades’ games. Oh, and he’ll be there for seasons 30 and 31, too, 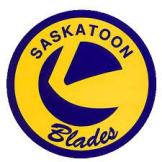 assuming all goes well and the creek don’t rise. . . . That’s because the Saskatoon Media Group (SMG) and the Blades have agreed to terms on a new three-year agreement that will run through the 2024-25 season. . . . This new agreement has the Blades’ games on CJWW, an AM station, for a second straight season. Being on the AM dial, Tyler Wawryk, the team’s director of business operations, said in a news release, creates “some consistency.” Prior to last season, the Blades had bounced among a handful of FM stations. . . . “We’ve appreciated being on some of the different stations at Saskatoon Media Group,” Wawryk added, “but moving back over to 600, which was the original home of Blades hockey on the radio, just has a wider range to cover.” . . . Lazaruk, who at one time was a pretty fair Strat-O-Matic baseball player, said: “Doing Blades’ radio broadcasts is what makes me want to wake up and greet each day, especially when one considers all we have gone through in the last 30 months! However, as the late, great broadcast legend Vince Scully used to say, ‘I need you more than you need me.’ I look forward to bringing you Saskatoon Blades’ action with all the professionalism and excitement I can muster.” . . . There is a complete news release right here.

I didn’t know I was hurt. Thought I just stunk.

The Regina Pats have signed Russian F Alexander Suzdalev, 18, whose NHL rights belong to the Washington Capitals. The Pats selected him in the 2021 CHL

import draft; Washington took him 70th overall in the NHL’s 2022 draft after he put up 51 points, including 15 goals, in 45 games with the HV71 junior club in Sweden. He signed a three-year deal with the Capitals in July. . . . From a Pats news release: “Born in Khabarovsk, Russia, Suzdalev moved to Sweden when he was seven years old after his father Anatoly Suzdalev had signed a bandy contract with Swedish bandy club, Vetlanda Bandyklubb. He holds dual citizenship, but has represented Sweden at the international level, winning a gold medal with Sweden at the 2022 IIHF World U18 Championships, skating in six games.” . . . Suzdalev also is quite familiar with Pats star Connor Bedard, who played in Sweden during a time when the pandemic had shut down the WHL. “When Connor Bedard played in Sweden, he played for my team (HV71 J18 and J20),” Suzdalev said, “so we know each other pretty well, so that’s where it all started. So when the opportunity came, I thought it was a great one.” . . .

It would seem that the Pats now hold the rights to four imports, the other three being Czech F Stanislav Svozil, who had 10 goals and 31 assists in 59 games with them last season; Austrian F Luca Auer, who was selected in the 2022 import draft, and Czech G Michael Hrabal, who also was selected in the 2022 import draft. . . . Svozil, 19, put up a goal and two assists in three games with Czechia at the 2022 WJC in Edmonton. A third-round pick by Columbus in the 2021 NHL draft, he has signed with the Blue Jackets and could play with their AHL affiliate, the Cleveland Monsters. . . . Auer, 18, was pointless in four games with Austria at the 2022 WJC. He is expected to play at home this season. . . . Hrabal, 17, is expected to play with the USHL’s Omaha Lancers this season. He has committed to the U of Massachusetts for 2025-26.

ANOTHER SIGN THE APOCALYPSE IS UPON US — From The New York Times on Thursday: An infection caused by a brain-eating amoeba most likely killed a child who swam in a Nebraska river over the weekend, health officials said Thursday. It would be the first such death in the state’s history and the second in the Midwest this summer.

THIS IS WHY WE LOVE BASEBALL — After the host Pittsburgh Pirates beat the Boston Red Sox, 8-2, on Thursday, ESPN Stats & Info tweeted this: “This is just the third time the Pirates have scored at least 7 runs on the Red Sox. The others were a 9-1 win on Sept. 17, 2014 and a 7-3 win in Game 1 of the 1903 World Series, when the Red Sox were the Boston Americans. . . . Cy Young pitched for Boston that day.”

This is how strongly folks felt about the senseless destruction of forest due to fire.
Ye Olde Manning Park Gallows sign was installed on #BCHwy3 in Manning Provincial Park after the “Big Burn."

Learn how we helped prevent avalanches with reforestation: https://t.co/HLOEhXTkZI pic.twitter.com/719tvu7tv3

The Kamloops Blazers have promoted Robbie Sandland to assistant general manager. He had been the director of player personnel. Sandland has been with the club since 2018, first as the head scout in B.C. He was named director of player personnel in 2019. . . . He will continue to work alongside Shaun Clouston, the team’s general manager and head coach, and Tim O’Donovan, the organization’s other assistant GM. . . .

The BCHL’s Salmon Arm Silverbacks have an opening after assistant coach Carter Cochrane left the team, having, according to a news release, “accepted a new opportunity.” Cochrane had been with the Silverbacks for three seasons. . . .

Alec Dillon has joined the junior B Victoria Cougars of the Vancouver Island Junior Hockey League as goaltending coach. The 6-foot-5 Dillon, 26, played seven games with the Edmonton Oil Kings in 2015-16 (2-2-1, 3.81, .871) after having been a fifth-round pick by the Los Angeles Kings in the NHL’s 2014 draft. But he was plagued by injuries — he underwent at least four hip surgeries — and retired after playing two seasons at the U of Victoria.

THINKING OUT LOUD — OK. You didn’t watch much, if any, of the 2022 World Junior Championship that is soon to wrap up in Edmonton. It’s August. You’re fed up with Hockey Canada. Whatever. Will you be back on the bandwagon when the 2023 tournament opens in Halifax and Moncton on Dec. 26? . . . Is it just me or are there far more gravel trucks on our streets and highways than there used to be? . . . QB Nathan Rourke of the B.C. Lions was lighting it up again on Friday, this time in Regina, before he left in the fourth quarter with an injury to his right foot. The Lions were up 28-10 at the time, and they won by that same score. Lions fans now will hold their breath and hope that Rourke can answer the bell for B.C.’s next game — at home to the Roughriders on Friday. BTW, there isn’t a QB controversy in Regina. Cody Fajardo is the starter . . . unless that sore knee doesn’t allow him to play, which may have contributed to his exit late in the first half of this one.

RORY WITH AN ACE — Rory McIlroy has been outspoken against those golfers who turned their backs on the PGA Tour for the Saudi Arabian cash of the LIV circuit. To which Patrick Reed, who isn’t the most-liked golfer in the world, said: “He’ll never win a Masters to complete a career Grand Slam.” . . . That is said to have brought this response from McIlroy: “The only chance Reed has of getting a Grand Slam is at Denny’s.”

The Brandon Wheat Kings are saddened to learn of the passing of Al Gibbs.

Al aka“Gibby” has been a part of the BWK family for over 30 years working as the away penalty box attendant and timekeeper. He will be greatly missed.

Our sincere condolences to his family and friends. pic.twitter.com/44uzQu2cI9

My Tweets
Join 4,641 other subscribers